The journey from Bluff to Cape Reinga is long – almost three million steps – but the road to healing from sexual abuse has felt a lot longer for a father of six who was raped over a period of several years by a family friend.

Sam Troth has embarked on a solo walk from the south of Aotearoa to the north, which will take him 55 days to complete. 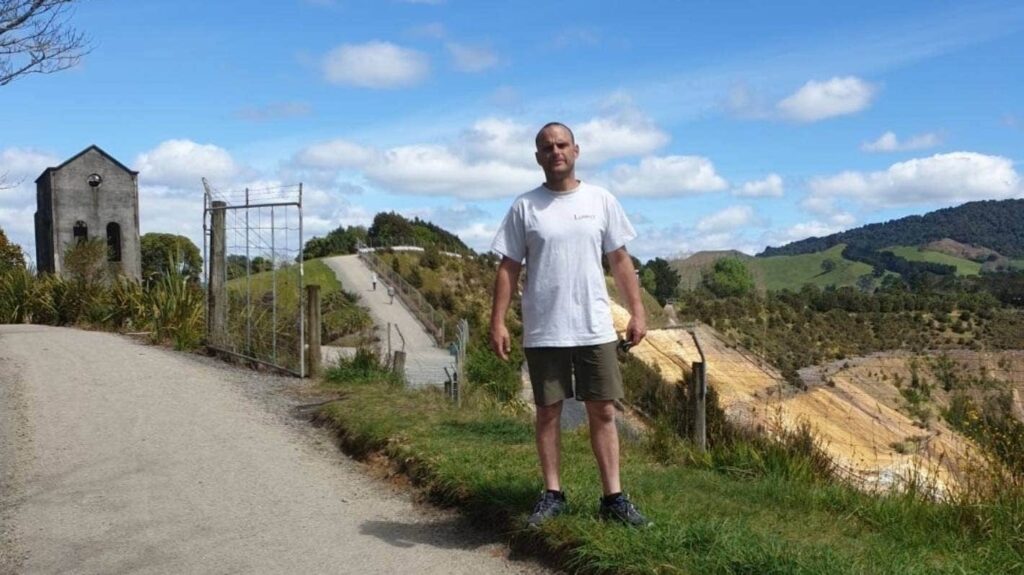 But it is not a long time for the 39-year-old Bay of Plenty man who took 25 years to speak out about how he was repeatedly raped and violated, and psychologically manipulated by an adult male who was a close acquaintance of his family.

Troth is walking as part of his own healing journey, but also to start conversations about sexual violence against men.

“Raising awareness of sexual abuse is my number one goal, to destigmatise abuse and to encourage victims to seek help.” said Troth.

Troth remembers the first time he was attacked as a young boy on a hunting trip.

“He got me alone, away from the group, and assaulted me,” he said. “I was scared, shocked, in a frozen state. Afterwards, when the group was walking, I was angry, wanting to shoot him, but I was just a kid.”

That was the first of many rapes. Troth said he felt too afraid and ashamed to tell anyone.

“My abuser was very cunning and manipulative. I felt I couldn’t tell my family, because he was supposed to be a friend. I thought there was something wrong with me.”

At the age of 14, after several years of abuse, Troth started “acting out” his anger, channelling it into “bad behaviour” which landed him in boys’ homes and prison. He developed addictions to drugs and alcohol.

”If I wasn’t getting high, smoking things, I was smashing things,” he said. “I was mad at the world, but now I know that I was actually screaming for help.

“When someone is young and angry and committing crimes, no one pulls you aside and asks what is wrong. Now I know that many boys of that age may have experienced abuse themselves. It is not an excuse for crime, but there should be a safe environment where they can speak out before it gets to that stage.”

Though Troth turned away from crime, trained to be a carpenter, got married and had six children, he kept his abuse secret – even from his wife – until two years ago when he became suicidal.

“Even though I had never said anything, inside I was still that stuck, scared little boy,” he said. “I had nightmares.

“Things like smelling something would take me right back to the abuse. I couldn’t take it any more. I wanted to tap out. But I didn’t – instead I sat down and told my wife what had happened to me as a boy.”

It was a conversation that led Troth to seek help. He received counselling through ACC and joined a support group. From carrying shame for years, he now wants to speak out.

“I suffered in silence, but I don’t want others to,” he said. “Speaking up not only helps healing, but removes power from abusers and can prevent it happening.

“With my own kids, we speak openly about how to stay safe and ask questions, and tell them what is not okay for people to do.

”People often talk to kids about ‘stranger danger’, but in fact, like me, many people are targeted by someone they know. It is helpful for people to know the signs that may point to the fact that a young person is being abused.”

Bruce Montgomery from Male Survivors Bay of Plenty is one of Troth’s counsellors. He said male sexual violence is the most common form of violence that men experience, yet is still seen by some as taboo, which adds to victims’ fears of seeking help.

“By doing this he is taking the power away from the shame that is often debilitating for men to step forward.”

Montgomery said that one in six boys up to the age of 18 will experience sexual violence.

His regional group has seen 83 men in the past two years, but Montgomery said there are many more victims.

“When we include mental, emotional, psychological and physical violence, the figures change to one in three young boys up to the age of 18 years, and subsequently the potential of 35,000 male survivors in the Bay of Plenty region alone.”

The age range of Montgomery’s clients is between 14 years old to 82. The major demographic representation is 36 per cent Maori to 46 per cent European New Zealanders respectively. The service offers counselling, peer support and groups.

Montgomery said it is not unusual for male sexual abuse victims to stay silent.

While there may be a perception that male sexual abusers are other men, Montgomery said around one in three perpetrators of sexual violence on young males are adult females.

Sam’s journey through Aotearoa began on Monday, October 24, in Bluff. Along the way he will visit several Male Survivors’ branches to share his story and inspire other survivors to “keep pushing forward”.

The hikoi will also stop in Wellington, where Sam hopes to visit parliament and share his story with ministers and officials, to advocate for support for victims, education and sensible sentencing.

He will be supported in the meeting by representatives from The Road Forward, a charitable trust providing peer support services to survivors of sexual abuse.

For Sam, his journey represents more than a hikoi and more than an awareness campaign – it signals the end of the suffering and a new beginning.

“It’s about giving all the shit back to that person who abused me,” he said. “He is now in prison, and I don’t have to carry this any more on my own. The sun is warm. Life is good.”

WHERE TO GET HELP:

The Harbour – online support and information for those affected by harmful sexual behaviour.

Need to talk? Free call or text 1737 any time for support from a trained counsellor.

By Annemarie Quill
Published in Stuff