From the Chairman’s desk, December 2018

Kia ora koutou As the end of the year approaches, it is timely to reflect on the achievements and challenges of the national organisation over the last six months. Some of the highlights include:

“When bad things happen to good boys” …stories from despair to hope in Nelson, New Zealand

In September a brave group of Nelson-based survivors self-published a book which recalls their personal experiences of sexual abuse. The book is a ‘raw and emotional read’ that reminds us all of the tragic impacts of sexual violence perpetrated on young boys.

These survivors also participated in the New Zealand Bristlecone project which was part of the international male survivor conference held in Christchurch last year (https://www.canterburymuseum.com/whats-on/the-bristlecone-project/).

The book was officially launched at the Whakatu Marae and to honour the courage of these survivors in publishing their stories, their Bristlecone photographs were returned to the Marae for the launch event. You can purchase a copy of the book on the MSA website.

In April this year Male Survivors Aotearoa (MSA) made a formal submission to the Royal Commission (https://malesurvivor.nz/resources/). Since then we have had several meetings with the Commission Chair and the General Manager to advocate for changes to the original draft terms of reference (TOR) to include all survivors of sexual violence and not just those abused while in state care.

The revised terms of reference, recently released, do include survivors of abuse within faith-based institutions but still do not include all other organisations e.g. sports organisations. There is also concern about how survivors will be admitted to the enquiry with a possibility that legal vetting will retraumatise people who wish to have their story heard.

MSA will continue to advocate for inclusion of all survivors arguing that it is unfair, unjust and inequitable for the New Zealand government to discriminate against specific groups of survivors.

It has been a busy year engaging with the Labour government’s wellbeing agenda, which includes a major assessment of sexual and family violence along with related issues within the justice sector.

The range of MSA’s engagement during recent months is clearly evident in the participation of our people in the following forums and events:

Meeting with The Minister

In November, Tony Chamberlain and I met with Minister Sepoloni to acquaint her with the challenges facing MSA and its member organisations. The essence of our conversation can be found in a brief summary attached to this update.

We are hopeful that our representations, in particular our concerns regarding the service-demand pressures for our Waikato and Otago members will result in some interim relief funding for those organisations.

MSA has launched its first research project – “Examining the journeys of adult male survivors of sexual abuse and the services they need: identifying effective practice and gaps from a ready model of peer support in New Zealand.”

I will be a co-investigator in a research team led by Associate Professor Louise Dixon (MSA Trustee – Research) and supported by Dr. Chris Bowden (University of Wellington) and David Mitchell (Lecturer, NMIT School of Health).

The project, which is generously funded by a special MSD research grant of $80,000, is expected to report later in 2019.

Since appointing Ken Clearwater to this role last July, he has been very active doing what he does best – championing the voice of male survivors in national and international conversations about sexual violence. Some of the highlights from Ken’s busy year so far include:

Presentations and Training for…

And a nice surprise in December – Ken received a well-deserved civic award for services to male survivors of sexual abuse…congratulations Ken. 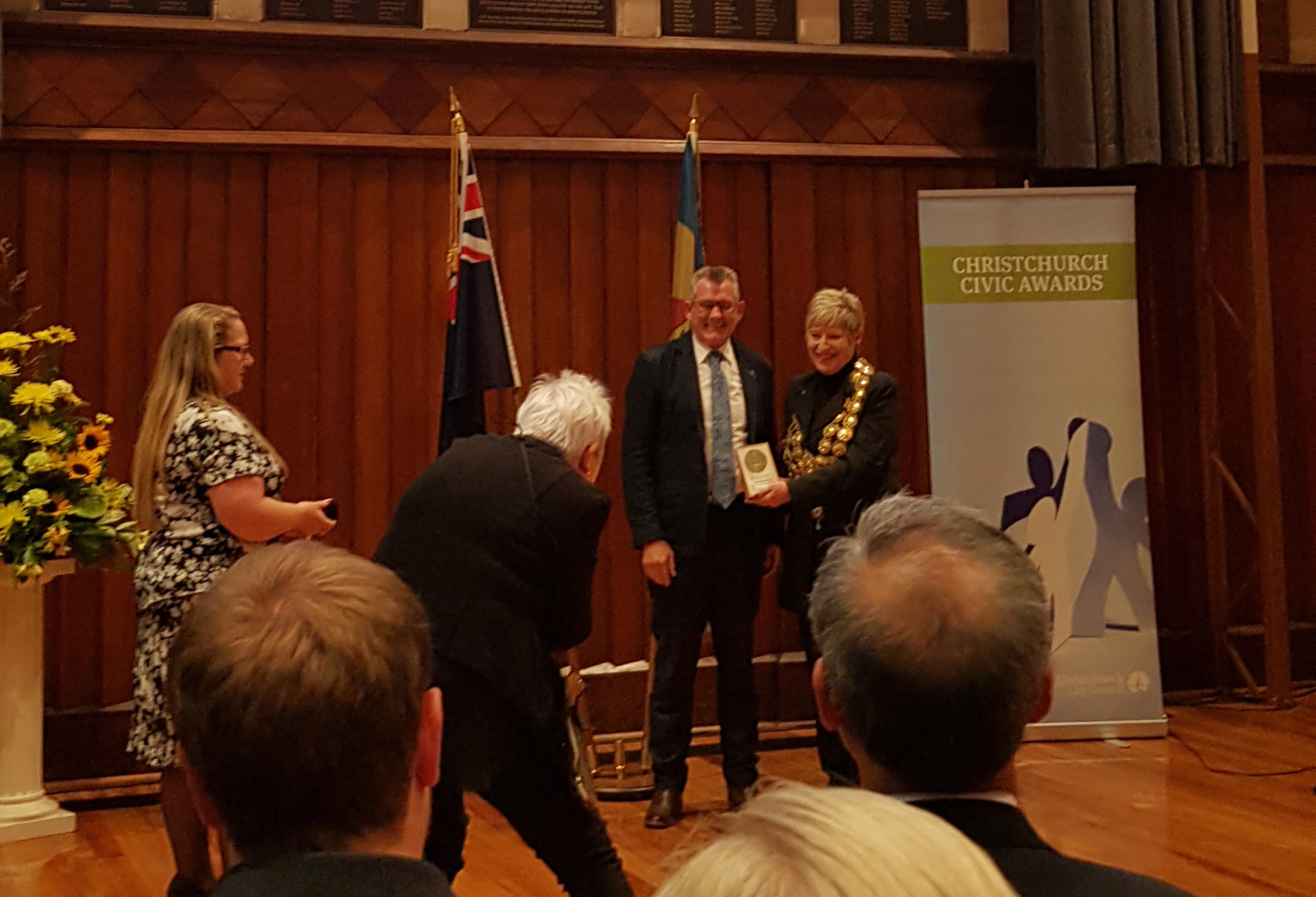 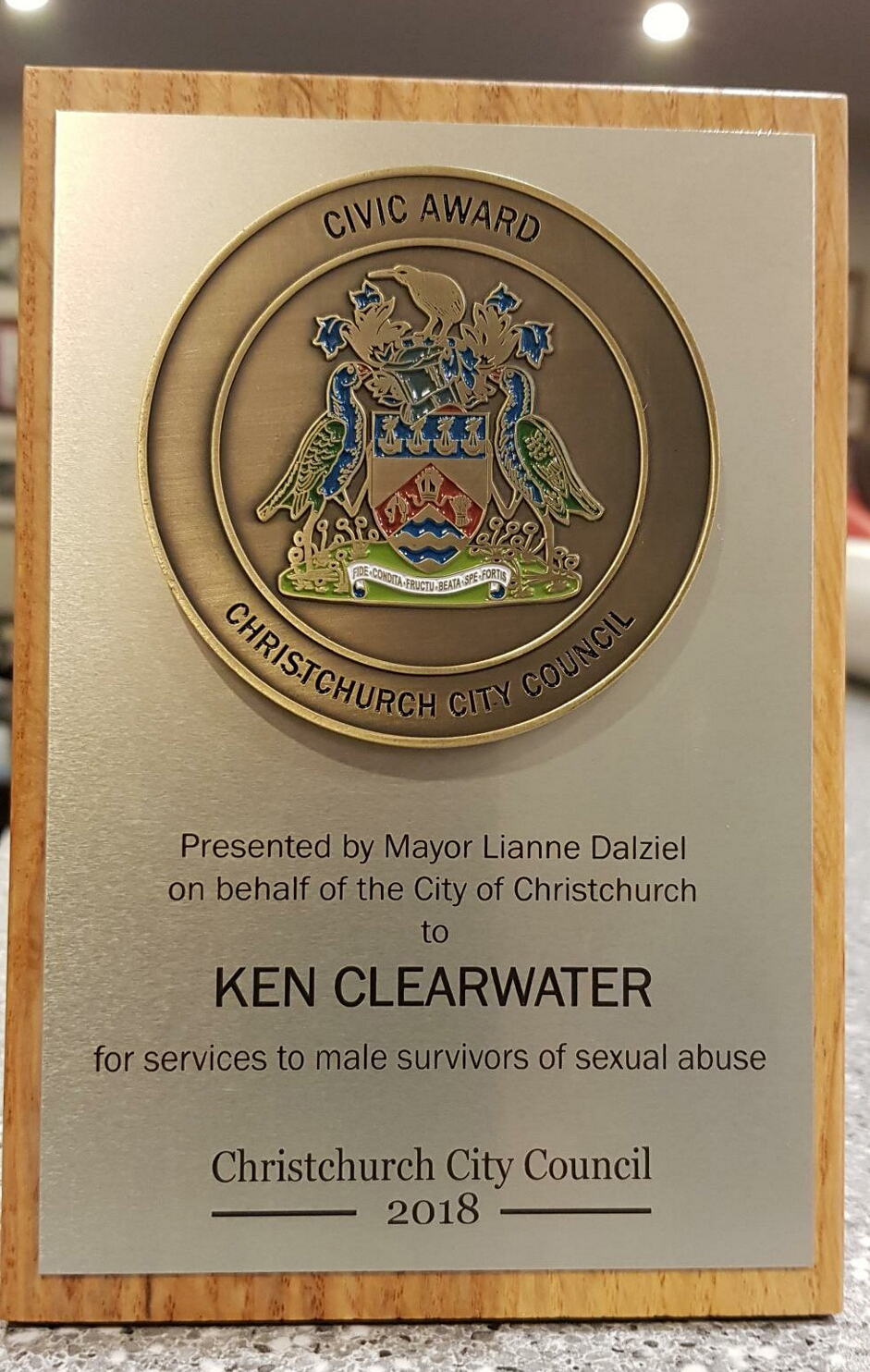 WELLINGTON
We are pleased to welcome The Road Forward Trust (RFT) as provisional members of Male Survivors Aotearoa. This development restores our national connection with a Wellington based peer-support service for male survivors and we are currently working with the trustees to expand the Wellington service.

RFT peer-workers Richard Brewer (Manager), Mike Cole and Taylor Champion will participate in our February peer support training and an RFT trustee will join the national board as an observer pending full admission planned for July 2019.

OTAGO-SOUTHLAND
Dugal Armour (Manager) and Tone Miller at MSSAT Otago have experienced a substantial increase in demand for peer support services resulting from the recently publicised abuse scandals involving Catholic Church schools and the establishment of the Royal Commission of Enquiry.

WAIKATO
Mike Holloway at Male Support Services Waikato (MSSW) is experiencing unprecedented demand for all of their male support services. For example, since the establishment of the Integrated Violence Response pilot in the Waikato, Mike has dealt with over 500 (unfunded) referrals, all of whom require some level of peer support. MSA is working with MSD to increase the peer support resources at MSSW – essentially a short-term interim response to a longer-term services funding issue.

TAURANGA
Following a referral from Mike Holloway, MSA are evaluating an opportunity to establish a member organisation in Tauranga and provide peer support services for male survivors in this region. More about this development in the new year.

Our intention is to further develop our own national training capability by appointing two national trainers who will complete the IPS train-the-trainers course, hopefully later in 2019 or early 2020.

Better Blokes (Auckland and Northland) have recently trialled their new Peer Group Facilitator training…more on that in the new year.

The current MSD funding agreement for MSA and our member organisations expires as at June 30, 2019. MSA have expressed their disappointment that the MSD-sponsored service development project did not continue to consider funding options. At this time, we have an expectation, but no assurance, that appropriate funding will be available from July 1, 2019.

In September MSA lodged a funding proposal with MSD. That proposal anticipates a fee-for-service arrangement with base funding assurances for small member organisations and continuity of funding for the national organisation. We are hopeful of feedback on our proposal once the sector funding arrangements become clear.

F2019 is already shaping as another busy and challenging year for the national organisation with a forward agenda that includes: –

On behalf of my fellow trustees,

From the Chairman’s desk, September 2021

Phillip Chapman, MSA Chair “We think sometimes that poverty is only being hungry, naked, and homeless. The poverty of being unwanted, unloved, and uncared for is the greatest poverty. We…

From the Chairman’s desk, December 2020

Phillip Chapman, MSA Chair “If you light a lamp for someone else it will also brighten your own path.” Buddah Kia ora koutou.

Phillip Chapman, MSA Chair “Don’t be afraid to take an unfamiliar path Sometimes they’re the ones that take you to the best places” Unknown Kia ora koutou.